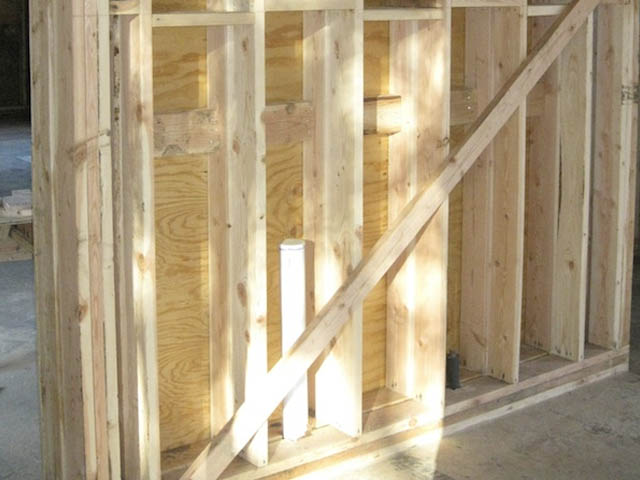 Over the years I’ve had a number of conversations with builders and homeowners about those strange looking finger-jointed (FJ) studs the framer was putting into their nice new home.  Why are they so ugly?  Are they just glued together?  Are they strong?  When walking the jobsite during framing, by far the most visible framing members are the studs.  Eye level, easy to see, easy to touch.  Is that really bark?  Are those just scraps they’ve glued up?  What’s going on here?!

The Original Engineered Lumber. Ok, maybe it did start out as a way to use up a bunch of short leftovers, but eventually builders and engineers realized that those ugly FJ studs tended to stay a lot straighter than solid lumber! Tired of running strings, shooting lasers and using other techniques to straighten studs prior to drywalling, framers took notice also.  Though it varies from one geographic market to another, DFW has now solidly been a finger-jointed stud market for almost two decades.  But how do you explain it to your concerned customers?

Are Some Finger-Joints Better than Others? Lumber grading rules generally allow wide latitude for mills to “make the grade”, but of course some are better!  Though counter-intuitive, it is actually better to have more joints (with 18” – 24” pieces) than fewer (only 1 or 2 per stud) – it increases the stability of the stud and minimizes the effect if one piece decides it wants to bow.  Wood does have a mind of its own, you know.  Length of fingers and strong exterior glue provides better bonding, where the joint is actually stronger than the un-joined portions of the stud.  Where appearance really matters, spring for FJ studs that are planed after joining.  Old timers will remember Ainsworth’s wonderful studs.

Things to Watch out For! Like any other stick of wood, a good framer will still be “crowning” every stud and watching out for culls.  Some finger-jointed studs are “scant” – meaning they are planed to a slightly narrower width (3-3/8” rather than the normal 3-1/2”).  This can cause big framer headaches, particularly for interior walls where the plate is full width.  Cheap FJ studs will often have joints that are incorrectly offset, causing your drywall guy extra work.   Orange peel texture may be able to hide a multitude of stud sins, but if your customer wants a Level 5 finish with glossy paint, forget it! Can you say “warranty claim”?!

Where Premium Studs are Essential. When you’ve got that discerning homeowner crawling the site every day and appearance really matters, there is still no prettier framing job than KD West Coast Doug Fir solid studs.  They are beautiful and Doug Fir (not Hem Fir, mind you) is the most dimensionally stable of the framing softwoods.  Not seen in Dallas much anymore, they stand out nicely.  Arguably, FJ studs still stay straighter though.

If only the best wood stud will do (and the budget permits), engineered Laminated Strand Lumber (LSL) studs are now tops!  Originally known by their Trus-Joist tradename “Timberstrand”, they are now also made by other mills.  LSL studs look kind of like OSB, but they perform splendidly in the following situations:

What does job require? Well, all things considered, I guess a stud is not just a stud after all.  As always, we encourage you to know what your specific job requires and confirm that what your framer is ordering (and what is being shipped to your jobsite) is exactly what you need to make that customer happy for the long haul.