Exterior Shutters – A Beautiful Addition to Your Home 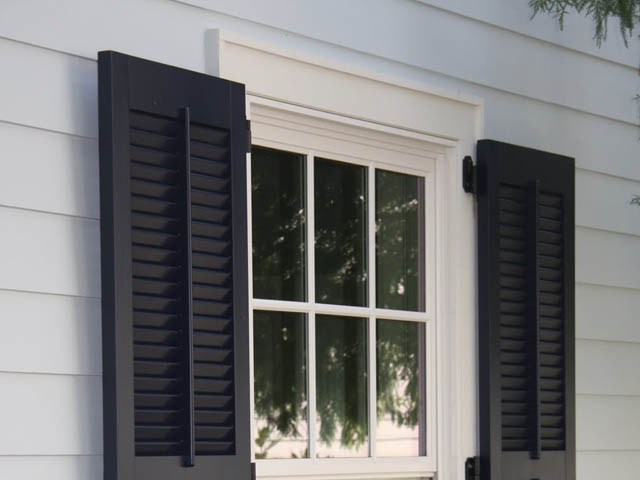 A wonderful architectural detail often overlooked or misused on homes is the outside shutters. Done correctly, they can be one of the home’s chief charms. Whether the architectural style of your home calls for louvered, paneled, battened, operable or radius shutters, the cost of well-made shutters is insignificant to the value and attractiveness they add to even the simplest of dwellings. Davis-Hawn Lumber Co. offers superior-grade shutters that can add the finishing touch to your home. Have you ever noticed shutters on a house that just don’t quite look right? Unfortunately, we see this all around town. As their name suggests, shutters are supposed to shut, yet most shutters are fixed with no hinges and don’t even cover the windows they were meant to protect! For example, you can’t paste 12″ shutters on the sides of two mulled double hung 3-0 windows. It just doesn’t look right, because form should follow function. For a single 3-0 window, the shutters should be half the width of the sash (or 18″). Anything more or less would simply look awkward and out of place if you tried to shut them. Same goes for shutter height – it needs to match the window height, not extending 3″ below the sill and 3″ above the lintel. Put simply, each shutter should cover half of the window when it is closed. Now I recognize that most people in our fair weather town will probably never even think about actually closing their shutters, but they should at least look authentic (like you could if you wanted to)! Architectural elements don’t pass the smell test when they stray far from their original purpose and function. Not only are most shutters the wrong size, well over 90% of shutters in the Dallas area are hung incorrectly. First of all, most are obviously not functional because there are no hinges and they are simply stuck to the walls on each side of the window. Secondly, the louvers are tilted in the wrong direction! Historically, in the event of a big storm, the shutters would be pulled closed from the inside of the windows and latched or secured with a slide bolt. As the rain comes down, the water would waterfall down the louvers (away from the windows), which would be in the down position when closed. However, when swung open the louvers would be in the up position. This correct louver orientation only works if the shutters are also hinged and have a proper air gap away from the wall. Otherwise, leaves, dirt and moisture will collect and accellerate the decay and demise of the shutters (especially if they are pine). There are many other factors to consider when ordering and installing shutters, which we can discuss at a later time, such as tilt control rods, rabbitted and beaded stiles, cut-out patterns, authentic forged hardware and shutter dogs, Cedar or composite/fiberglass, priming, center rail and panel configuration, and the list goes on. When possible, be sure to mount the shutter to the window casing or brick mould and not to the brick or siding of a house. Also, copper caps will add some flair, help shed water and prevent deterioration. Done correctly, exterior shutters are a beautiful addition to most homes!