Lumber’s Record Pricing: Will it continue into 2018? 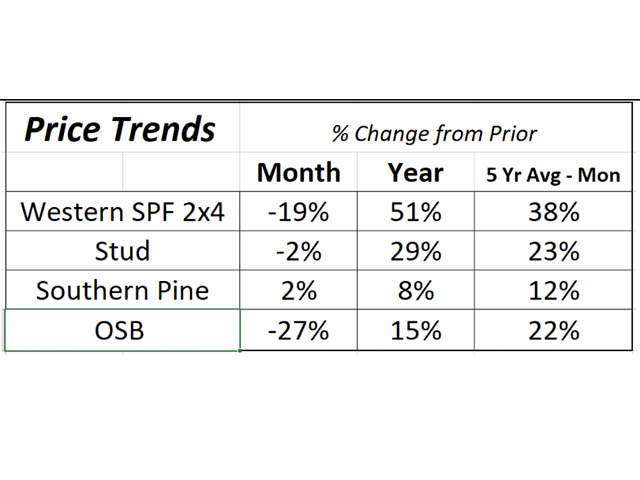 The end of the year gun has sounded.  Thanksgiving has come and gone and those of you who put up Christmas lights in late October your time is now. One must see movie at our house during the Christmas Season is It’s a Wonderful Life with Jimmy Stewart.  It is the story about all of us told through the eyes of George Bailey who longs to travel the world and make it a better place leaving his hometown of Bedford Falls behind.  In his youth he states “the three most exciting sounds are anchor chains, plane motors and train whistles”.  However through a series of events George is tested to choose his loyalty to friends and family in Bedford Falls over self.  Over time George sees the results of his sacrifice as everybody else getting ahead yet he remains to keep the home fires burning.

The antagonist of this story is the banker Mt Potter, who is a shrewd businessman but lonely and generally disliked in the town.  During a heated exchange of a board meeting at the Building and Loan, George tells Potter off by labeling him a “warped and frustrated old man”.  What George fails to realize is he too is developing those very characteristics.  Then we meet Clarence (George’s Guardian Angel) who proceeds to grant George his desperate wish “that he had never been born” when scandal befalls the Bailey Building and Loan.  Through a series of interactions with folks George has known all his life in Bedford Falls (renamed Pottersville) he comes to the realization he is a stranger to everyone he loves.  It is in this moment he realizes all the opportunities he sacrificed had collectively resulted in the relationships he held most dear.

The story ends with George returning to the Bedford Falls he knows.  His friends and family come to the aid of the Building and Loan’s issue and all is concluded with a rousing chorus of Auld Lang Syne. During this holiday season my hope is you will have some time to reflect on those things that bless you daily but easily get overlooked.  Clarence said it best “Remember, George: no man is a failure who has friends.”   Market Notes: By all accounts the market has slowed as mills take time for end of the year shutdown repairs and buyers are more cautious when it comes to supplies in the yards as the end of the year approaches.  The market as a whole is taking a pause.  However indicators point to similar conditions from 2017 going into 2018 as there is little indication pricing will level off at this point.  The effects of weather (fires and floods) coupled with the political hand slapping of our Canadian Trading Partner continue to make their effects known in the market on the Supply Side.