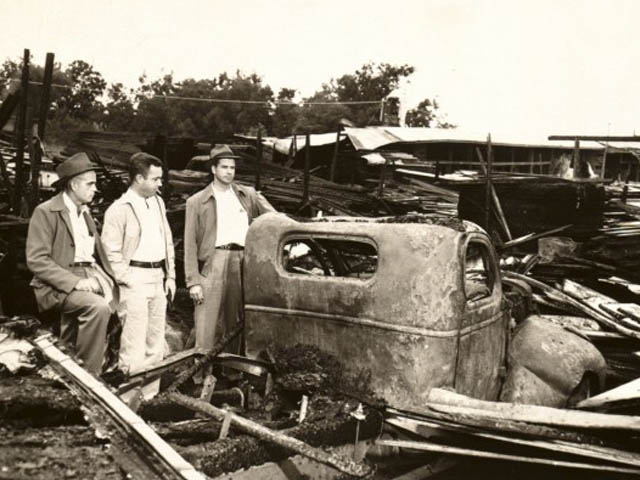 June 20th marks Davis-Hawn Lumber Co.’s 90th anniversary. Steeped in Dallas’ history, Davis-Hawn is a story of perseverance, dependability and commitment. It was 1923 when Wirt Davis, long-time chairman of Republic Bank, built the lumberyard on his family’s farmland along Beckley Road in rapidly growing Oak Cliff. In that year, Warren G. Harding was U.S. President, Babe Ruth christened Yankee Stadium with its first home run. It would be another four years before the founding of Dallas Methodist Hospital and Love Field’s opening as a municipal airport.

Originally known as Davis-Johnson Lumber Co., part of the capital contribution for the business was a pair of oxen valued at $250. Mr. Davis’ minority partner was W. B. Johnson, later a Dallas City councilman. During the roaring 1920’s Oak Cliff was known for its amazing parks and swimming holes, particularly Lake Cliff Park and Kidd Springs Park, where early Dallas went to dance, roller skate, gamble, boat and play. Mr. Davis owned Kidd Springs and many other large tracts of Dallas land in addition to the timberlands near Livingston, Texas and the sawmills there that supplied Davis-Hawn with its high quality lumber.

When founded, the lumberyard on Beckley Ave. was on the very Southern edge of Dallas and located on the Interurban Railway lines that connected Dallas to Corsicana and Waco. Just down the street, its sister millwork company called Houston Band Mill re-manufactured lumber and built window sashes and other architectural millwork products. The saws and lathes were powered by leather belts overhead, with dangerous swing saws and multi-head moulders in use. The early lumberyard had extra wide turning areas for the horse-drawn delivery wagons of the day and Beckley was the main thoroughfare leaving Dallas to the South (Interstate 35 would be decades later).

Wirt Davis II came back from the war in Europe in 1945 to manage the family businesses. Shortly thereafter he brought on Joe Verne Hawn, one of 6 brothers from Athens, as another partner and changed the name to Davis-Hawn Lumber Co. The lumberyard was destroyed by a massive fire around 1949, that locals reported could be seen for miles around. In the accompanying photo, E.S. Wheeler, who would be the lumberyard’s manager for almost 50 years, inspected the charred remains of the Company’s first delivery truck with Mr. Davis and Mr. Hawn. He is also in the photo of the brand new showroom built after the fire, selling Jones-Blair paint.

The horse-drawn wagons, drafting tables, and belt-driven saws have now been replaced by cutting edge software and logistics, CAD, and CNC routers and moulders, but the Company’s core values of integrity, quality, good value and great people live on. Native Dallasite and recovering lawyer, Dave Reichert, bought the company from Mr. Davis in 1999 and continues to build upon its traditions of craftsmanship and character. Davis-Hawn Architectural Millworks has grown to be the premier radius millwork shop in North Texas, creating beautiful curved mouldings, cased openings and paneled archways, which are architecturally correct and fit perfectly.

Today, Davis-Hawn combines the best of both worlds – as a locally-owned independent business with personalized customer service, and as a proud member of the nation’s premier lumber buying group (LMC), with billion-dollar buying power and competitive prices. Combined with its on-site architectural millwork shop and community hardware store, Davis-Hawn is unique in its ability to well serve custom builders, remodelers and preservationists with broad product offerings and expertise.

In Texas, a true celebration calls for some savory slow-cooked BBQ, and that’s yet another tradition Davis-Hawn strives to uphold. So on the anniversary date, Reichert plans to smoke up his award-winning brisket (having won Oak Cliff’s Blues, Bandits, & BBQ contest this past fall). Come join us at the “Yard” this Thursday 11:30 to 1:00, helping us to celebrate a great business and great BBQ – both well-seasoned!

Thank you Oak Cliff and Dallas for the first 90 years, we sincerely appreciate your business. Build to Last.